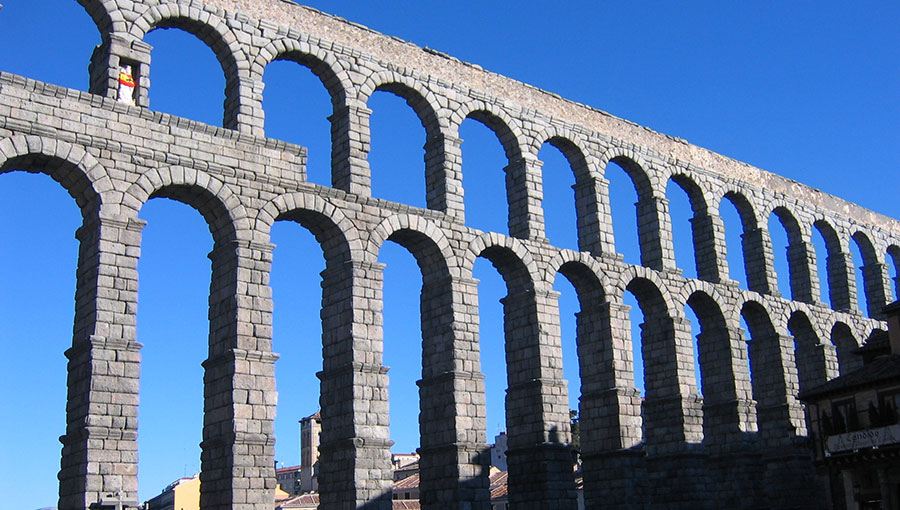 At World IA Day 2014 I talked about the IA mindset – the thinking, skills, questions and philosophy that an information architect can bring to a team to make it more effective. I spoke then about IA (in fact about the BBC’s UXA role) within the context of a single project. I needed an example, so I picked a recent project and spoke about how it was enhanced through thinking like an IA. But Information architecture is really ‘the horizontal discipline’. IAs connect things, and we probably bring most value when we don’t think in terms of individual projects or products in isolation, but work to provide the connections across them. 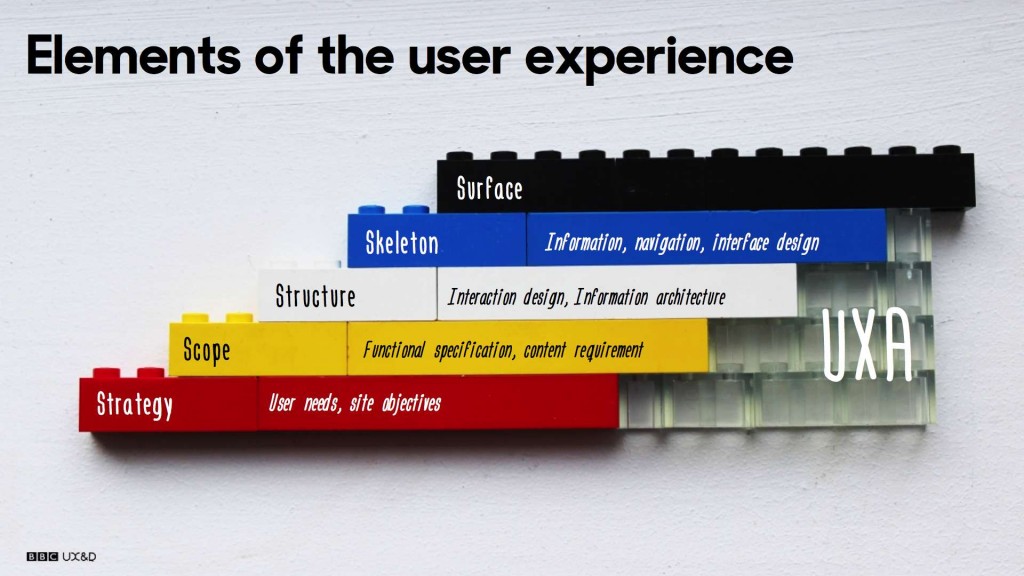 I’ve used Jesse James Garret’s ‘Elements of the user experience’ in the past to define where I think UXAs bring value. Although the ‘Stucture’ element is where an information architect might expect to have the most hands-on involvement (this is where much of the IA skill-set is concentrated), I’ve been arguing for a while that UXAs bring the most value when they extend their concern and influence beyond ‘structure’ and bring the IA mindset to bear on the whole experience. We can tie experience together. The image above implies that we’re the scaffolding which underpins the other elements and disciplines. I think this underpinning, foundational role is where we UXAs are most effective.

In any large organisation some of the work is necessarily aligned to “verticals”. In order to manage teams effectively they’re often broken down into smaller teams. At the BBC we have ten products, each product might have several teams (UX, developers, product managers…) and each team might in turn be working on their own workstreams or projects. This keeps things manageable. It simplifies lots of the day-to-day challenges that might otherwise distract us from the actual thing we want to do – make brilliant experiences for our audiences. Organisationally there is virtue in building these vertical teams and structures – it’s a more flexible, resilient and manageable system than many alternatives. But it does present challenges.

In the same way that the colour differentiation above implies that the elements of the experience are distinct stages in both definition, execution and consumption – creating ‘vertical’ teams around products or projects implies and creates a separation. In extreme cases this separation can lead to disconnection, and this is where things start to go wrong – when verticals become silos. But it doesn’t need to be like that. We can have the efficiency of verticals and still exploit economies of scale because there is a horizontal discipline. IAs are the connective tissue that connect and combine ‘verticals’ into experiences.

Being a UXA is a difficult job and it requires a specific skill-set and mindset. But to be truly effective, the difficult challenges are the ones that we need to seek out and take responsibility for. In Jesse James Garret’s ‘five elements,’ IA comes somewhere in the middle. But the segmentation of the discipline into a stage of development underplays the value a UXA can bring. It also negates some of the accountability that we should be held to.

Too often UXAs are part of the team, but usually not the most senior member of the team and too often without overall responsibility for decisions. IAs do recommendations really well, but I think we might be less prone to making assertions. We rightly recognise that the best answer is usually, ‘it depends’. But maybe this is what keeps us from leading. We’ve struggled to find a way to lead with nuance. But I think there is a way, it just takes effort. I’ve started developing a set of five heuristics that describe what good IA brings to a product. I’m hoping that these can both be a guiding light when making IA decisions, but also a ‘report card’ against which we can mark ourselves. I think if we’re going to argue (or probably more accurately persuade) that we need to be involved and take more decisions – we need to be able to describe the specific types of value we can bring. And at the end of the process we should be held to account over whether we delivered what we promised. Too often IA is seen as an enhancement to the way we do things – it’s an application of a strategy rather than an element of a strategy. I think this should change.

IA isn’t just a stage of a project where we receive a brief and eventually hand over a tabbed spreadsheet with site structure, URLs and anything else we can think of to justify our role. UXAs should be more ambitious and effective.  We are the horizontal discipline. We allow ‘vertical’ teams to do what they do best – focus on specific challenges and opportunities. We can help with that, there should be IA expertise in every team – that’s the skill-set part of information architecture. But the IA mindset is the thing that pulls our eyes up and away from the spreadsheet and starts to see the connections between the verticals, noticing the gaps and projecting structure into them to bridge it.

A horizontal discipline brings with it challenges. There are complications when tying IA responsibilities to projects for which the UXA does not have overall responsibility. There are organisational challenges to creating structures of responsibility and accountability when your ability to craft a solution is dependent on the decisions of others. But we need to overcome these challenges, define how we are accountable and take responsibility.

UX&D at the BBC are recognising the value that UXAs can bring when they think across products and start to think in terms of services (both internal tools and the ecosystems we offer to the audience). We’re starting to build a new way of thinking about IA and UXAs at the BBC. We’re beginning to see the potential UXAs and IA skills offer for connecting the verticals. We’re starting to build the horizontal discipline.